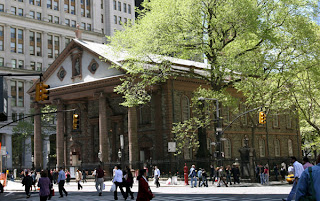 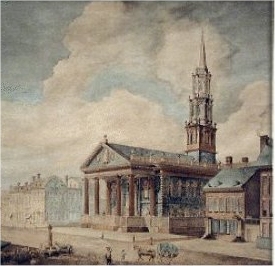 Less than one month after the World Trade Center
attack I stood at the southeast corner of Broadway and
Vesey Street, in front of St. Paul's Chapel.  Looking
down Vesey I, and thousands of others, watched the smoke billowing into the lower Manhattan sky as firefighters, the military, National Guard, and other workers tried to contain the fires, remove debris, and recover the remains of victims.

Most of lower Manhattan during those weeks had been
closed to car traffic from Canal Street southward.  People
were allowed to walk around a tightly guarded area east
of Ground Zero.

It was the largest funeral wake I've ever attended.

In contrast to the normally robust sounds of cars, taxis, truck, subways underground, and the general noise of a huge city, that day and many other days in lower Manhattan offered visitors an erie silence.

St. Pauls Chapel has been at this corner since 1766.  It is the oldest church in New York, and the oldest continually used building in the city.  St. Paul's survived the great fire of New York in 1776 after the British invaded Long Island. St. Paul's also survived the 9-11 attack in 2001.

This Friday, I, my mother, and my cousin will be in the City for a long weekend.  On Saturday, we will go to the World Trade Center site, and the new Freedom Tower.  Although I've been to NYC many times since 9-11, I've not seen the new tower, and monuments.  I plan to stand on that same corner  and see a different picture.

Even through vibrant activity that now continues up and down that stretch of Broadway, it will be a sobering view.