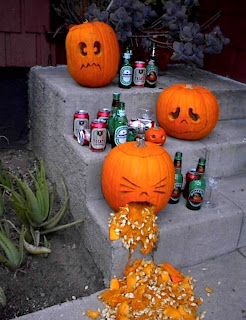 Someone sent this to me a couple of years
ago.  I thought it was a hoot!  Just be sure
to have fun and keep it clean, kids!!
Happy Halloween!
Rick
Posted by R. Burnett Baker at 3:31 PM 7 comments:

Amazing!  This past Monday I posted a photo of our family cemetery monument in Amarillo, Texas along with a short poem titled "ark".  (see my last post, Oct. 25, 2010).  And this week's Magpie prompt:  A grave stone!

As I wrote previously, my Mother and I took a trip to visit, for the first time since he passed, my Dad's grave.  It was the first time she had visited him since the funeral because the cemetery is over 600 miles away. Texas is a big place! The grave stone there, or monument, rather, is a story in and of itself that I'll post in the near future.

We had a wonderful trip that took us just over 1600 miles total.  We visited many friends we haven't seen in years and family we don't see often enough.  Tonight I'm posting my Magpie Tale, and later there will be another short poem I've written about the family monument.

Thanks to Willow for continuing to challenge our creativity, and to all those who write, and read and visit each other! 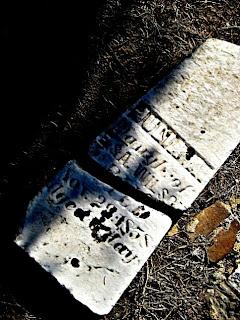 monument
the past and future
tallied and foretold
in stone:
chiseled monuments
abridge the fractured lives
of forgotten
histories. 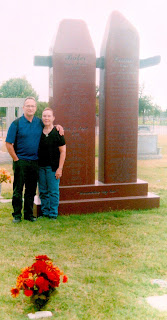 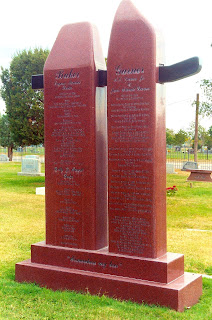 Back Home In Rochester

Arrived back in Rochester Sunday after a whirlwind run through Texas with my mother.  The trip was mainly for her to visit Dad's grave after four months...the cemetery is 660 miles away, so that accounts for the whirlwind!

We drove from Houston to Tyler, Ft. Worth, Amarillo, Austin, San Antonio, and back to Houston.  Well, actually 60 miles north of Houston.  We visited decades long family friends, family, our former minister and his family, and long dead ancestors in various country cemeteries around the Texas Panhandle.  It was a tiring drive, but fun.  We talked of the past, the present, and what we thought everyone should do in the future.  We even solved a few world problems.

Now, back in Rochester,  I rested yesterday and tried to catch up on my blog visits.  I'll be posting later this week.  Back to work today!

All the best to everyone! 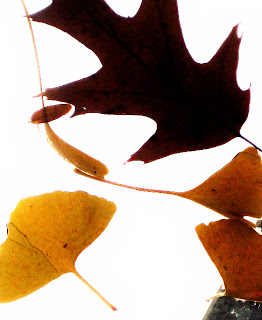 
the
art of autumn
is canvased
beneath our feet


greeting this
season of
colorful dying


with raptured living
and incomplete
lives. 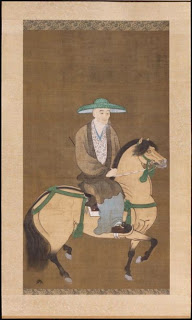 LINKING VERSE WITH ART:
Western Perceptions of the Painting
"Poet Sogi on Horseback"
Created by Kano Motonobu.
My intention here is not a "scholarly" dissertation on the development and intricacies of Japanese linked verse, nor do I want to dwell on Japanese art alone. Discussions of Japanese linked poetry become quite technical and complex in their focus on style, rhythm, and sequence of verse construction, among other things.
Likewise, art historians sometimes have a tendency to break down an extremely intuitive process into mechanical methods and motives.
My purpose is to briefly blend thought, perception, and emotional response to literature and the visual arts, with the desire for more appreciation than total understanding.
Serious reading on these subjects can aid in a deeper appreciation of the arts. But for me, at least, leaving something to the imagination helps me see more of the beauty and mystique of poetry and art.
Some years ago, for only 85¢ I thought that the greeting card with the Japanese painting of Sogi On Horseback would hang nicely on a wall at home. I think it was the expression on the poet's face that first caught my eye.
Though I never framed the card, I still find the print attractive. Why? Simplicity. Balance. Strength and power portrayed through the horse in contrast to the calmness in posture and subtle sensuality of the poet's face. Highlighting these personal views is the reserved but effective use of color in the painting.
The Kano family in Japan gave to art a number of the leading painters to the Shogunate for more than 200 years from the end of the 15th century to the beginning of the 17th century. The Kano school of art exhibits many Chinese influences but remains distinctively Japanese for several reasons. The main reason is that since the family became firmly established as painters to the Shoguns and feudal lords in the provinces, the Kano school of art gained an official status. Works produced by these artists, as illustrated by "Sogi On Horseback" maintained high standards of craftsmanship and precision of form. The Tokugawa shoguns were admirers and supporters of the Kano school, providing the artists with commissions, land and houses. So with this official mandate, so to speak, Japanese painting began to lose much of the religious and scholarly overtones, and focus more on decorative attributes.
Kano Motonobu, the son of the founder of the Kano school of painting, was