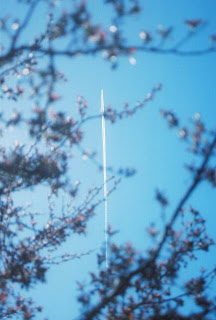 The following is an essay I posted on my other blog, BakersTake, two years ago. I'm taking the liberty of reposting it here today.

Some years ago I heard, or read conspiracy chatter about contrails being a sinister plot by the government to spray chemicals over the country as some kind of mass experiment. It may have been talk show host Art Bell who did a program about contrails. Doesn't really matter who. I heard it somewhere and had to laugh about it.

Most people I've talked to don't even know what a contrail is. As a boy in the Texas Panhandle I would see aircraft contrails every day in the clear skies of the plains. Now, I watch them in the early mornings at sunrise. I'm fascinated by them, not because of what they are doing to the masses, but because of where the aircraft might be coming from, and where they're going. I watch them coming over from the northeast and imagine that this one or that one or the one over there is coming from Europe and headed for, gee, I don't know, maybe Chicago, or Atlanta, or Houston, or the west coast. Others coming in from the northwest surely must be flying in from Asia for New York or Boston, or Washington DC.

I think of the time it takes for each flight. From my many years of travel to and from Asia I know that to get from Rochester, NY to, say Taipei takes a total of about 22 hours. Not all of that in the air, mind you, but it's a long haul. As I look up in the morning at each streaking contrail I know that the brief time it takes each plane to fly out of my sight is but a flash in the sky compared to the total time those passengers will experience on their journey. For some time after the plane has vanished from my view, the contrail will remain. It either quickly dissipates, or spreads out on wind currents, finally appearing as a stretch of clouds.

Each part of this experience is a measure of time: My view of the tiny plane, the time it takes the plane to vanish from view, the flight time each invisible passenger spends on the journey, and the time afterward that the contrail is visible. The contrail, for me, is the only evidence of a journey taken by those passengers. It's my confirmation of life that passes above me, and speeds rapidly away.

Four years ago, on the 5th anniversary of 9/11, I happened to be outdoors on that clear morning, as usual looking up at aircraft and their contrails. It struck me that it was September 11th. In less time than it took for one of the aircraft to vanish from my sight, I quickly wrote a short poem. Today, as we mark another anniversary of the day that redefined our world views, I'll share that poem here.

In the morning as the sun rises, look up and watch a jet carry lives from somewhere to somewhere else. Consider all the elements of time that journey represents. See how long the contrails last. And appreciate the short time you're able to live, stand, look into the sky and imagine.

evidence of a journey

swept away on winds